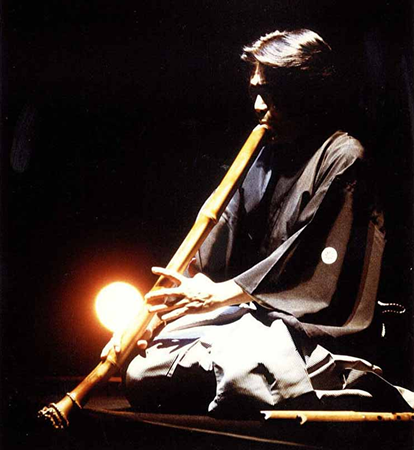 Nakamura is a unique shakuhachi player who makes use of circular breathing based on his own distinctive method and missoku(“esoteric breathing”), a method of breathing with ancient origins in Japan. He mastered this method over many years through his own single-minded effort and it enables him to make free use of harmonics. He has also mastered the technique of playing and singing different melodic lines at the same time.

The core of his work as a musician involves the collection, analysis and performance of shakuhachi music handed down in pre-modern times by the mendicant Zen monks known as komusō, but he is also active in a wide range of musical genres including rock, jazz, contemporary classical music, improvised music and cross-genre collaboration.

He has been sponsored by many organizations including the Japan Foundation in Japan’s Ministry of Foreign Affairs to perform at the Queen Elizabeth Hall in London, the Lincoln Center in New York, the Blue Note Jazz Club in New York, and the Kennedy Center in Washington D.C.

He has introduced as one of Japan’s leading jazz musicians at the Montreux Jazz Festival in Switzerland and has performed in over 150 cities in more than 40 countries on the basis of invitations from, among others, the Festival de Saint-Florent-le-Veil in France, the “Jazz in Japan ” Festival sponsored by the Maison de la Culture du Japon in Paris, the Ravinia Festival in Chicago, the Transonic Musical Festival in Berlin, the Festival Vancouver in Canada, the Istanbul Music Festival in Turkey, and the Kuhmo Chamber Music Festival in Finland.

He has released twelve CDs including Komusō shakuhachi no sekai: Edo no shakuhachi, Tsuru no sugomori (The world of Zen music: The shakuhachi of Edo, Tsuru no sugomori)(Victor Entertainment). His CD release from Nippon Columbia entitled Komusō shakuhachi no sekai :Saji (The world of Zen music: Saji) was awarded the Prize for Excellence in the record category at the 1999 Arts Festival sponsored by the Agency for Cultural Affairs and the Columbia Golden Disc Prize.

His Victor Entertainment release Komusō shakuhachi no sekai: Hokuriku no shakuhachi, Sanya (The world of Zen music: The shakuhachi of the Hokuriku region, Sanya) was awarded the Prize for Excellence in the record category at the 2005 Arts Festival sponsored by the Agency for Cultural Affairs.

Akikazu Nakamura is also active as a composer, in which capacity he was awarded the 18th Encouragement Prize for Creative Achievement in the Stage Arts sponsored by the Agency for Cultural Affairs. He has received commissions from NHK, West deutsche Rundfunk, the Ravel String Quartet in France, the Jean Sibelius String Quartet in Finland, the Munch Trio in Germany, and Music from Japan in the United States.

Akikazu Nakamura teaches at the Tokyo University of Arts, the Graduate School of Senzoku Gakuen College of Music, Toho Gakuen College of Drama and Music, Yamanashi Gakuin University and the Asahi Culture Center. He is a member of the Japan Society of Contemporary Music and director of the Ishinkai branch of Myōan-ryū and Kinko-ryū shakuhachi.